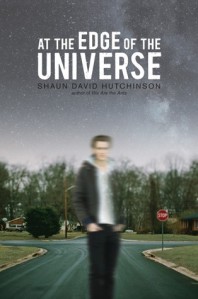 Tommy and Ozzie have been best friends since second grade, and boyfriends since eighth. They spent countless days dreaming of escaping their small town—and then Tommy vanished.

More accurately, he ceased to exist, erased from the minds and memories of everyone who knew him. Everyone except Ozzie.

Ozzie doesn’t know how to navigate life without Tommy, and soon suspects that something else is going on: that the universe is shrinking.

When Ozzie is paired up with new student Calvin on a physics project, he begins to wonder if Calvin could somehow be involved. But the more time they spend together, the harder it is for him to deny the feelings developing between them, even if he still loves Tommy.

But Ozzie knows there isn’t much time left to find Tommy–that once the door closes, it can’t be opened again. And he’s determined to keep it open as long as possible.

“I sat beside the window pretending to read Plato’s Republic as the rest of the passengers boarding Flight 1184 zombie-walked to their seats.”

Oh my God, you guys; I did it! I finally read my first ever Shaun David Hutchinson book after people on Goodreads recommended me to read We Are the Ants! And now that I’ve read one of his books, I need to read them all. Like, right now, damn it.

First of all, this book was so unexpectedly angst-y??? I mean, I absolutely loved how depressing and realistic this was, but what is with all these angst-y gay books? Why are all these authors duly set on breaking my damn heart? But, seriously, I loved this, and I could relate to it so well. Ozzie is in his senior year of high school, his boyfriend and best friend have vanished, and it seems like everyone in his life is moving forward except him. I’m only in my sophomore year of high school, as you guys might know, but, God, the fear of the unknown feels so realistic. Personally, I’m excited to get the hell out of high school, and I’m ready to go to college and travel and do something with my life that I care about, but do you know how terrified I am to adult? What in the world I’ll do once I’m out of college, especially since I’m a socially anxious mess? Will I make new friends? Will the ones I have now be left behind as memories? Will I still be blogging? Will I still be in love with the books I am now? Clearly, I have a lot of worries about “after college,” so I understood how Ozzie felt about being unsure of the future. I feel like everyone is, just a little.

And, ugh, the characters! I love Ozzie. He’s a sarcastic asshole who’s crude and might piss you off with the things he won’t do and things he actually DOES do, but I loved him so much. He deserves all the hugs, and he continuously made me laugh throughout the book, especially since I’m a negative, sarcastic person as well. We also get to meet Calvin, who reminded me of Adam from the Raven Cycle, and I LOVE Adam, so you can guess how much I’m in love with him. And we also have Ozzie’s friends, Dustin, who’s a stoner type, but is also a genuinely nice guy, and Lua, who’s gender-fluid (which was awesome, because I’ve never seen a gender-fluid character before in a book, and, I personally thought was handled so well and wasn’t treated like some big deal) and is a rocker type and every word out of their mouth gives me life, honestly, especially that whole rant about how girls don’t get some sort of “free pass” to experiment. I LOVE THEM, OKAY? And we also have Warren, Ozzie’s brother, who goes through some problems that I’m not going to talk about because that would be SPOILERS, but I definitely loved him.

THE ROMANCE BETWEEN OZZIE AND CALVIN THOUGH. It honestly slayed my life. At first, I didn’t even ship them, but as the book went on, I just couldn’t help myself. It was just so wonderfully realistic and angst-y (this book was angst) because they’re both so awkward and Ozzie still loves Tommy and Calvin cares about him so much, but he also has baggage and Ozzie wants to help him but doesn’t want Calvin to hate him and they’re both total science nerds and just aljflajflajflaj. AND THE ENDING KILLED ME, but again, not talking about spoilers. I just ship them so freaking hard.

I also loved the concept of this book. I’d say it’s a mix of magical realism and sci-fi, and it was so interesting. I really want to get into sci-fi this year, and it’s like books like this that push me forward. The universe is literally shrinking, and I loved how the chapters showed how it was happening, and then the last few chapters kicked in and it was just so intense. I didn’t think the science was too complicated for people to not understand, and it definitely kept me reading. There’s just something about this book that has an addictive quality that I completely fell in love with.

Overall, READ THIS BOOK DAMN IT. I literally cannot wait to read We Are the Ants. And, since we’re talking about that book, I see what you did here, Hutchinson.

(Also, brief note: I’m going to take a break this whole entire day! I’m not going to be responding to comments, but I’ll probably be around looking at people’s posts who I follow, on occasion! I’m just trying to get everything together because I’ve decided to start a chill bookstagram account – I’m already really happy with the pics I took – and I’ve been trying to make my Goodreads look nice and I’m hoping to plan some stuff out. It’s not a hiatus or anything and I’ll be back tomorrow morning, but I just wanted to let you guys know!)