What better way to ring in the brand spanking new year than complaining about how terrible 2017 was in terms of books?

(I mean, pretty much everything was terrible in 2017, but especially this.)

Today, I’m linking up with Jamie @ The Perpetual Page-Turner’s Annual End of the Year Book Survey to talk about the (measly) amount of books I read this year! Because I’m a cheating cheater who cheats a lot, I cut a bunch of questions I didn’t really care for, but the end result is pretty freaking great, I think (totally not biased at all).

Because I am a massive cheat, I shall present you guys with a massive graphic featuring twelve of my favorite books that I read in 2017! There are definitely more that I could’ve included (The Marriage Pact, Little Monsters, Warcross, Gemina, etc.) but there’s only so much space and too little I could shrink a book before it looks actually ridiculous.

2.) Book You Were Excited About & Thought You Were Going To Love More, But Didn’t?

No competition, The Love Interest! I raved about this book for so long on my blog before its release, and my day was absolutely made when I received an e-ARC of it via Netgalley. I was super disappointed when I finished it and realized I just felt…meh.

(Going by the Goodreads reviews, I’m definitely not the only one.)

3.) Most Surprising (in a good or bad way) Book You Didn’t Read?

Left over from this year, I still have A Court of Wings & Ruin and A Conjuring of Light. It comes as no surprise that both of these books are dense fantasy series finales. Pattern, much?

(Also, is there a good way to end up not reading a book?? I seem to only have a bad way.)

6.) Most Action-Packed/Thrilling/Unputdownable Book of the Year?

The Breakdown by B.A. Paris!! Behind Her Eyes by Sarah Pinborough!! They Both Die At the End & History Is All You Left Me by Adam Silvera!! Warcross by Marie Lu!! The Roanoke Girls by Amy Engel!! Boy Robot by Simon Curtis!! Genuine Fraud by E. Lockhart!! Release by Patrick Ness!! I read so many!!!

Once again, I shall cheat and present your eyeballs with a graphic featuring some covers of books in 2017 that were just absolutely stunning.

A three-way tie between Caraval by Stephanie Garber, This Savage Song by V.E. Schwab, and They Both Die at the End by Adam Silvera.

(I love how diverse these choices are.)

9.) Most Thought-Provoking/Life-Changing Book of 2017?

No one is surprised when Mikaela chooses The Hate U Give by Angie Thomas.

I’ve been recommended Shaun David Hutchinson’s books left and right, and for some strange reason, I still!! hadn’t!! read!! one!! of!! his!! books!! I finally traversed into new territory, AND IT WAS SO WONDERFUL. I can’t wait to devour all of his work from now on

A three-way tie between My Husband’s Wife by Jane Corry, Behind Her Eyes by Sarah Pinborough, and The Roanoke Girls by Amy Engel.

(Honorable mention goes to Wonder Woman: Warbringer because that plot twist at the end about a certain character BLEW MY MIND.)

Ozzie and Calvin from At the Edge of the Universe were absolutely adorable and made me feel all the feelings! Same with Mateo and Rufus from They Both Die At the End. EXCUSE ME AS I GRAB SOME TISSUES.

13.) Favorite Non-Romantic Relationship of the Year

Easily the one between Kate and August in This Savage Song. Hip hip hooray for platonic relationships between boys and girls in prominent young adult literature!

14.) Favorite Book You Read in 2017 From An Author You’ve Read Previously?

Little Monsters by Kara Thomas for sure! I read her debut novel The Darkest Corners last year and grew to adore it, and I wasn’t surprised when I fell in love with her sophmore novel. The Cheerleaders looks amazing, and I can’t wait to sink my teeth into it next year! 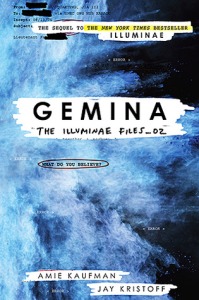 WoW, i WoNdEr WhAt It’S gOiNg To Be?*

(The Hate U Give by Angie Thomas, duh.)

*That was much harder to type than you think it would be.

It doesn’t matter whether I finished the book or not, I will always want to visit The Night Court. ALWAYS.

I’ve actually never cried at a book before, but then came along They Both Die At the End to cure me of that. Thanks, Adam!!!

(No, really, thanks Adam Silvera, for blessing us with your writing talent; please never stop.)

I shall present to you all these books that I hated this year. I actually didn’t read too many truly bad books this year, which I think is pretty awesome! But, I still read some pretty bad books, and here they are!

(They made some very entertaining reviews to write.)

2.) Best Discussion You Had On Your Blog?

One hundred percent my discussion about the dilemma of being a diverse reader. It’s one of more personal posts, and I really enjoyed seeing everyone’s thoughts and seeing their points of view (also, I was deadly terrified that I would be hated for it, but I wasn’t, so good for me for overcoming my fears)!

3.) Best Event That You Participated In?

No one will be surprised that it’s Bookcon! I had so much fun, and I’m really hoping that I’ll be able to go back sometime in the future!

A tie between reaching 1,000 blog followers (which is a goal I was aiming for, but seriously thought I wouldn’t get for YEARS) and being a featured blog on WordPress (which wasn’t even in my periphery, but was so humbling, and my notifications blew up for days afterwards).

5.) Most Challenging Thing About Blogging Or Your Reading Life This Year?

Oof, definitely all the time I put into blogging. I’m spending even more time blogging now, but it takes SO MUCH TIME if you really want your blog to look good. And, sometimes, I’ll have really off days, but doesn’t everyone?

From the creator of Black Mirror comes the first book in an anthology series featuring original stories from leading fiction writers, all set in the world of the cult series.

Edited by Charlie Brooker, the creator of the hit Netflix original series Black Mirror, this book takes the very essence of the globally acclaimed cult TV show to create new, original, darkly satirical stories that tap into our collective unease about the modern world. This is Black Mirror in book form, allowed to roam through the imaginations of some of the leading names in contemporary fiction. This collection will challenge you to see the world in a different—and more disturbing—light.

If you listen really closely, you can hear me SCREAMING.

A dark, wholly original YA debut about one boy’s refusal to fit in to a society where everyone has nine lives.

In an alternate world startlingly close to our own, humans have nine lives—and they can’t wait to burn straight through them.

As you shed lives, you shed your awkward phases: one death is equal to one physical and mental upgrade. Julian’s friends are obsessed with the idea of burning lives, but Julian is determined to stay on his first for as long as he can. His mother, the ultimate cautionary tale, burned through her first eight in just a few years, and Julian has no intention of succumbing to the debilitating rebirth sickness that she inflicted on herself.

But the regime has death incentives aimed at controlling overpopulation, and Julian realizes that he’s going to have to burn at some point—especially when he becomes a target for Nicholas, the manipulative leader of the Burners, the school’s suicide club. And when Julian eventually succumbs, he uncovers suspicious gaps in the rebirth system that may explain exactly why his mother went so far down the rabbit hole years ago. Along with a group of student dissenters, Julian sets out to find answers and is soon on the verge of exposing the greatest conspiracy ever unleashed on the world.

He has just eight more lives to uncover the brutal truth.

HOW CAN YOU READ THAT AND NOT BE SHOOKETH?